Bucheon, South Korea, is a city where the modern arts such as comics and screen music have developed under the municipal slogan “Special City of Culture.” The city is home to the Bucheon Philharmonic Orchestra, one of the finest orchestras in Korea, and hosts the annual Bucheon International Fantastic Film Festival (BIFAN) under the themes of “Love,” “Fantasy,” and “Adventure.” Bucheon is also widely recognized as a cartoon city where cartoons, comics and animated films make up a large part of the cultural fabric of the city.

Bucheon is the city where Korea’s one of the most active night school movement began in the 1970s among laborers who had not been able to continue their studies and instead started to work in the factories. The movement was born out of the desire of workers to continue learning, even while battling their need for sleep, and the ardor of university students who sought to help them stand up for their own rights. Bucheon is thus a city with a passion for education, where people know that learning can change lives. This night school history and lifelong learning tradition resulted in Bucheon joining the UNESCO Global Network of Learning Cities. Bucheon City led the successful bid to become a UNESCO city of Literature in October 2017; the first in Asia and the 21st among the world’s prestigious network of recognized cities. 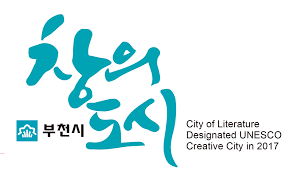