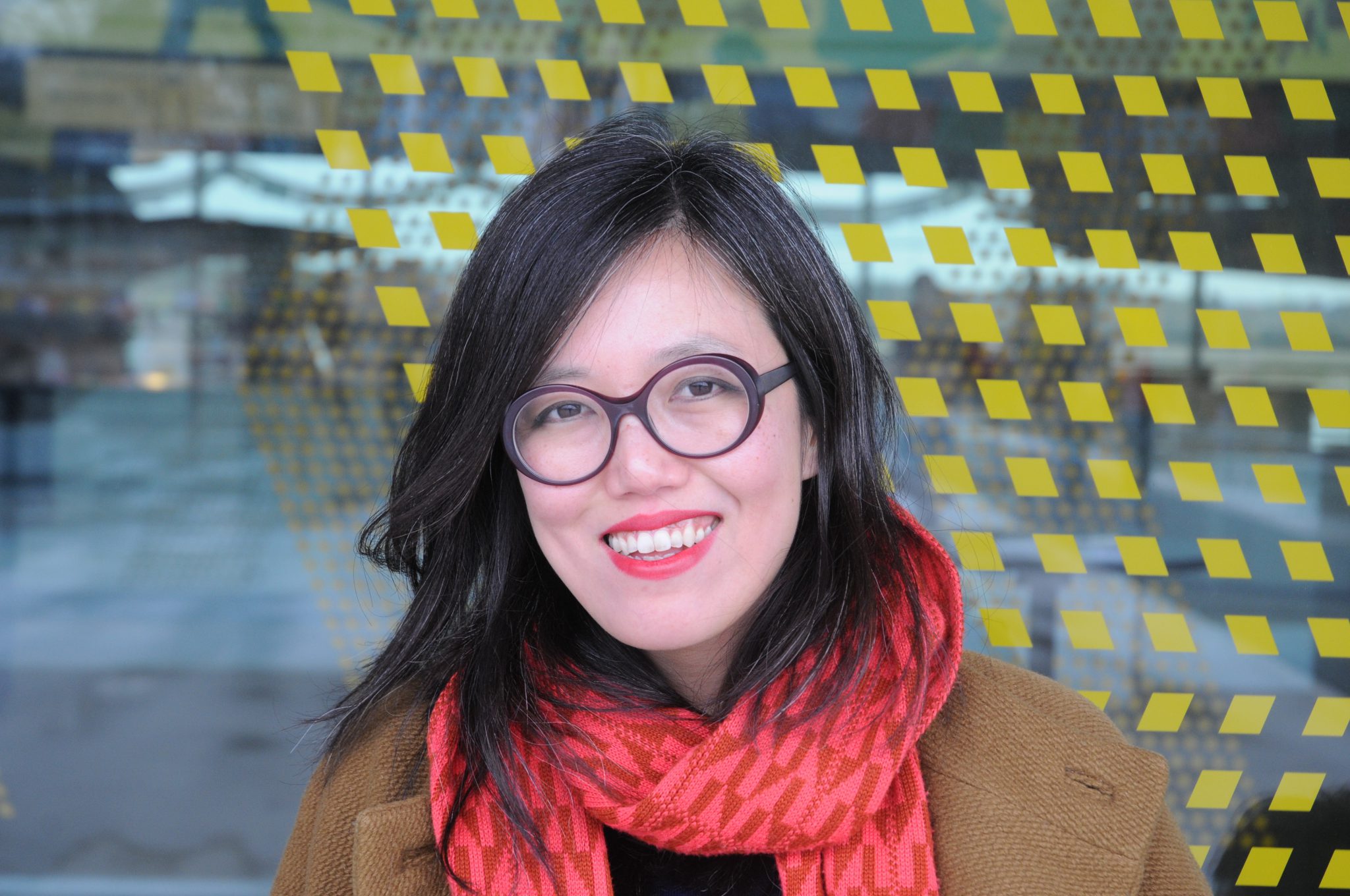 Mia You on languages mixing, writing poetry and Utrecht as a literary city

Mia You is author of the poetry collection I, Too, Dislike It (1913 Press, 2016) and the chapbook Objective Practice (Achiote Press, 2007). She was born in Seoul, South Korea, grew up in Northern California, and now lives in Utrecht where she teaches English-language literature in the Language, Literature and Culture department of Utrecht University. Mia shared her ideas about languages mixing, Utrecht’s literary scene, and writing poetry about the civic integration (inburgering) process.

What topics do you write about?

A few years ago I won a C.C.S. Crone stipend to complete a collection called Festival that deals with my civic integration (inburgering) process as an immigrant to the Netherlands, as well as my earlier immigration from South Korea to the United States. The Dutch translation of this collection will be published by Uitgeverij Chaos, now an imprint of Das Mag. My manuscript is mostly in English, but it incorporates aspects of Korean and Dutch. For example, I have one poem in the manuscript called “The Sequined Principle” that is about the time that Mark Rutte put out a newspaper ad proposing that immigrants who do not want to live according to ‘Dutch norms’ should leave the country (“doe normal of ga weg,” act normal or go away). This pre-dates Trump. On the Dutch television programme Zomergasten in 2016, Rutte even said ‘pleur op’ (essentially, fuck off) to these immigrant groups. In my poem, I play with Rutte’s language through puns, rhymes and absurdly literal translations, as my own form of trying to show how ridiculous and obscene this all is.

The ad was published around the same time as I was doing my civic integration process, and enough has been said about how ridiculous the test questions are. But I was also aware of the privileged position from which I doing the process. I am married to a Dutch person, I am from the United States, and I teach at the university. Those are reasons to be considered a ‘good immigrant.’ There was never any doubt that I could stay. When politicians talk about immigration as a problem, it usually implies certain kinds of people and not other kinds of people. But this is discrimination, by definition. After all, Rutte’s ad could apply to me too. I have no desire to be ‘normal’ within a nativist, neo-liberal country.

I am also interested in how multilingualism brings new forms of expression into the English language. The Oxford English Dictionary added about twenty Korean words this year that are now commonly used in English, partly because Korean pop culture has become so well-known worldwide. English is not just defined within the US and UK. It is a global language, and its rules are also made in places that we normally don’t think of as English-speaking. I’m interested in how this happens in the Netherlands as well, how both Dutch and English evolve due to how the languages mix here.

Would you have been a poet if you weren’t a scholar?

A lot of my writing engages earlier poets on whom I also do my scholarship. My work as an academic and as a poet are intertwined; they are different modes of engaging with the same thing. For me, personally, the way to become a poet was to get a PhD in literary studies. Learning to read carefully and critically was my way of learning to write.

I am not someone that believes that a poet writes spontaneously out of their heart or soul. I believe that the way we think, and the values we have, emerge from the received language that we have internalised. After you are born you learn how to say certain things, and what you say is never just ‘one’ word. It is always contextualized. I saw that with my children too, the way they learned what the word ‘bear’ means comes from all the different sentences about bears that they have encountered. If they saw a bear in a book or even at the zoo, in real life, they would start reciting all the sentences about bears they had heard before. I really believe poetry is about that diverse formation of language. Words and contexts come inside of you and spin around and then come back out in a new form.

Is that a conscious process?

Poetry is a craft, but it’s not one where anyone can say, ‘You need to work on something for X amount of hours,” or “Only at this point you know you are finished.’ Still, you do have to sit down and take the time to write a poem. It is so much easier to do an Instagram post or write an email. Writing a poem requires a much more intensive form of attention. You have to commit to being totally absorbed into the world you are writing about. I often begin with having a few lines of poetry in my head and then thinking about what should follow. It is exciting to see what happens when you put certain words next to each other and slowly find out what a poem has to be. My mentor Lyn Hejinian has called poetry a space for inquiry. I agree with that. Through poetry you go to places you couldn’t foresee, and you go deep. You have to give yourself the space and time for that.

Did you start writing when you became an academic or before?

Writing was always tied up with school in some way. When I was eight, my teacher recommended me for a special creative writing class for young kids. I still remember we had to write a poem using alliteration, and I was given the letter A. I also had to memorize and recite the poem ‘I’m Nobody’ by Emily Dickinson. I still love it.

I moved to the U.S. from South Korea when I was three. My mother wanted to make sure I would learn the language quickly, so she immediately signed up for a public library card. At first, she would read to me, then she realized she could leave me in the library to read on my own while she did other errands. Almost all of my childhood memories are set in the public library. To me, the public library is one of truly great things we humans have ever come up with. And becoming American for me was very much about reading the literature.

How is it to be an English-language poet in Utrecht?

It’s both nice and strange. To be honest, most of the events I’m invited to, and make friends and connections at, are in Rotterdam and Amsterdam. I was really surprised when I got the Crone stipend, because until then I didn’t feel very connected to the Utrecht literary scene as a writer. There is, for example, the Utrechts Stadsdichtersgilde (the Utrecht Poets’ Guild) and to be in it you have to write in Dutch. This applies to the Nacht van de Poëzie too, an event I would truly love to read at, but I don’t expect I ever will. I am always happy to attend in the audience, of course, but I would feel more connected to Utrecht as a literary city if there was more to do for local writers of various languages and backgrounds. I think there’s an idea that especially English-language writers have an international platform, so they don’t have to be invited to local initiatives. But we all want to feel we belong in the place we live and to be asked to do events in our city. We’d like to be able to invite our neighbours to them. I am hopeful about it, now that Utrecht is a Unesco City of Literature.

Although the Netherlands is considered a one-language country, there are actually many dialects, many languages in fact, used here, such as Frisian, Papiamento, Limburgish, Dutch Sign Language, etc. I know some are wary of the increasing use of English here, but I don’t think drawing strict linguistic borders around Dutch literature is a way to save it. Again, it come back to this idea of ‘normal.’ What is the ‘normal’ for Dutch literature and its language? Who decided? Do we all agree it’s what we want? Did Gerard Reve, Herman Gorter, or Multatuli write using the same Dutch language that someone uses for writing an article in the Trouw today? Languages are always evolving, blending into each other, pushing each other to define themselves. While my poetry looks like ‘English,’ a lot of it involves Dutch and Korean phrases, or my dog barking and birds singing, that were circulating around me and then rendered into my own weird English.

Does Utrecht influence your poetry?

Whatever space a poet is in deeply influences what they write. The material conditions of anybody’s life deeply affect their thinking, their creative production, whether they are conscious of it or not.

Two of my closest poetry friends, Obe Alkema and Maarten van der Graaff, are Utrecht-based poets. We sometimes meet up at Café Jan de Winter on the Oudegracht. We actually bonded because we were often at poetry events in Amsterdam, usually Perdu, and would take the train back to Utrecht together.

I’m always inspired by the programs put together by Lisa Weeda, Isabel Reker and Nicky Hessel from Mooie Woorden. I like that they work with varying locations in Utrecht too, ranging from bars, bookstores, and monuments, such as the Pieterskerk. And of course, Sayonara Stutgard from Uitgeverij Chaos is the editor of my next book. The last time I saw her, she told me I need to do more to relax, which is hilarious because I don’t know how anyone could have enough time to do all the things she does. She’s amazing.

Do you have any other projects coming up?

One project that’s really new that I’m really excited about is translating a collection by the South Korean poet Kim Hyesoon. Her previous translator Don Mee Choi won the National Book Award last year and a MacArthur Fellowship this year, so she is really busy with her own writing and art practice. Kim Hyesoon and Don Mee Choi invited me to try translating this next collection, and I am really honoured and happy to have this way to connect to Korean literature. I’ve also been translating the poet Kim Haengsook, also introduced to me by Don Mee Choi, and some of those poems are appearing in the Chicago Review this fall.

Who would you like to nominate for the next interview?

Benjamin Moser is one of my oldest friends in Utrecht, and through Ben, I got to know Arthur Japin and Lex Jansen. I have to say I most associate Lex with Utrecht. He runs Uitgeverij Magonia and organizes workshops for Dutch writers in France. For over a decade he was director of Arbeiderspers and key in developing the Privé-domein series. He has been instrumental in bringing the writing of international intellectuals to the Netherlands.