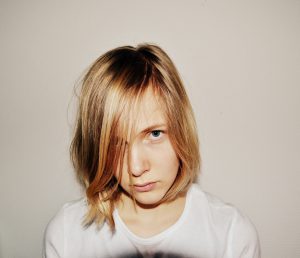 Marieke Lucas Rijneveld (1991) is regarded as one of the greatest talents in Dutch literature. With her first novel, De avond is ongemak (The Discomfort of Evening, 2018) she won the Booker International Prize of 2020, together with her translator Michele Hutchison. In 2015 she made her debut with the poetry collection Kalfsvlies (Calfskin), which has been reprinted multiple times and was awarded the C. Buddingh’ Prize for best poetry debut. She has given readings at many literary events and her poems and stories have been published in numerous literary magazines. Rijneveld grew up in a Reformed farming family in North Brabant and currently lives in Utrecht, the city that awarded her the C.C.S. Crone Scholarship in 2015. Alongside her career as a writer she works on a dairy farm.